Menu
DONATE
SHOP
Back to Past Events

​Early Maps of Manhattan & the Evolution of the Collect Pond

Early Maps of Manhattan & the Evolution of the Collect Pond

“The earliest known survey of the Island of Manhattan and the only document recording the ‘layout’ of the little settlement of New Amsterdam that has down to us from the early period of Dutch occupation, is the Manatus Map, of 1639…”
wrote I.N. Phelps Stokes in The Iconography of Manhattan Island

Click on the image to see a larger version.

Notice the streams on the lower tip of Manhattan. The Collect Pond was connected to the East River and the Hudson River.​

​The “Duke’s Plan of New York” 1664, British Museum
“This map, popularly known as the Duke’s Plan, was probably presented to the colony’s new proprietor, James Duke of York (brother to Charles II and himself later James II), shortly afterwards in the expectation that he would agree that the town be renamed New York in his honour. …”

Note: This is oriented with south on top.

​Novum Amsterodamum 1671 Arnoldus Montanus
Note the hilly terrain. “Manahatta” is a Native American word for land of many hills. 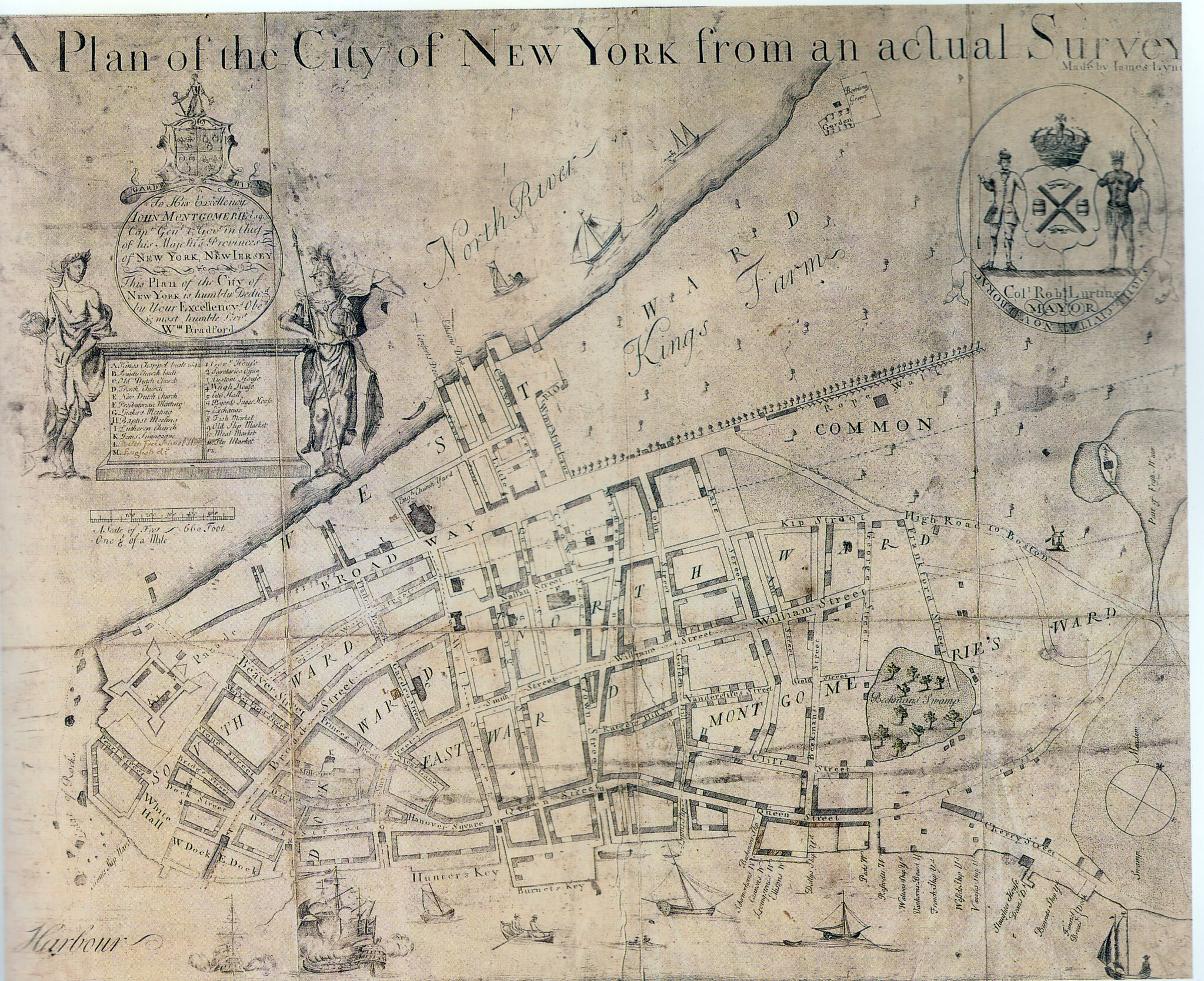 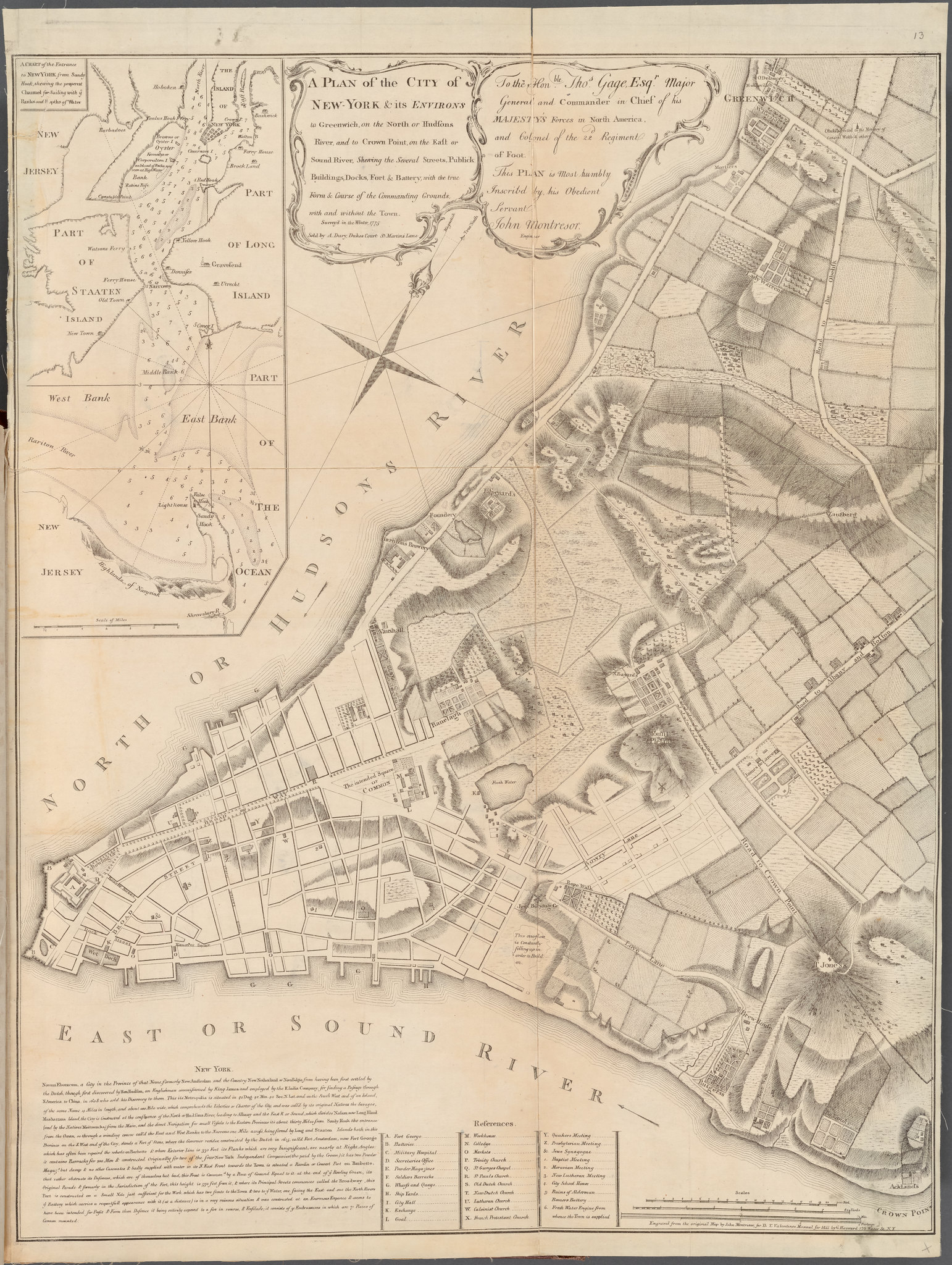 The Ratzer Map surveyed in 1766 NYPL 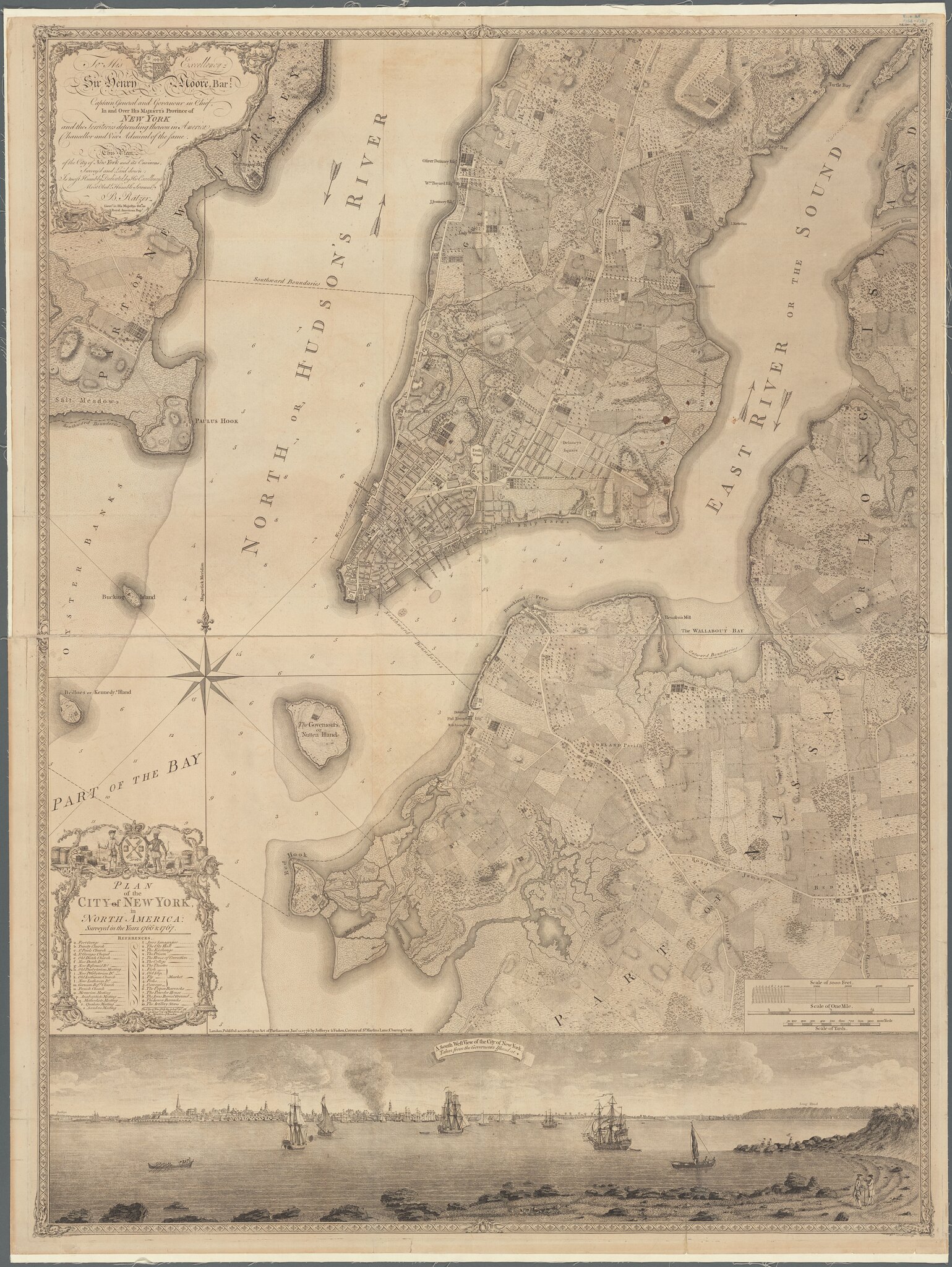 The Collect Pond
“Among the more important public improvements undertaken at the beginning of the nineteenth century was the filling in of the Collect, a body of water covering the area approximately bounded by the present Elm, Baxter, Pearl and White streets. On the western shore of this water the Dutch found a deposit of decomposed shells; hence the name Kalch, Callech, Colleck or Collect. By the English the water was popularly known as the Fresh Water Pond. The pond was surrounded by broad stretches of swampy ground, half land and half water, which extended across the island, excepting about 150 yards of salt meadow on the North River and about 300 yards of similar meadow on the East River. A sluggish stream along the line of the present Canal street furnished an outlet into the North River, while on the opposite side a similar stream, called Wreck Brook, communicated with the East River at the foot of the present Roosevelt street; so that, at exceptionably high tide, the waters of the two rivers mingled in the Collect. By 1733 the stagnant pond had become a menace to the public health. Consequently, in that year, it was granted to Captain Anthony Rutgers, who proposed to improve its sanitary condition by a system of sluicing and damming devised by himself. This system no doubt had some effect in carrying away the unhealthy stagnation. But with the multiplication of dwelling and other houses around the Collect the sense of danger to the public from its polluted waters increased, and in 1791 the city purchased Captain Rutgers’s heirs’ interest in it for £150. The filling in of the pond was apparently begun in 1803, when the dirt excavated on the site of the City Hall in City Hall Park was dumped into it. But it was not until 1808 that the work was undertaken in earnest. The city being then full of sailors and laborers thrown out of employment by the Embargo act, the city government, to relieve the distress  among this element of the population, engaged a large force of  men to obliterate the pond by leveling into it the surrounding hills. Two years later the improvement was completed.”  (page 30)

A History of Real Estate, Building and Architecture in New York City  by The Real Estate Board 1898 (This is a thorough history of the development of NYC from the Dutch days through 1898.)

Hills around the collect pond 1798  printed in 1920 MCNY
The Montresor map above shows the contour lines for the some of the hills depicted in this image.

​Canal Street
“In the same year [1808] another important improvement was accomplished. The stream between the Collect and the North River was deepened and widened into a canal, which not only carried away the overflow from that part of the Collect not yet filled in, but which also drained the great swamps alongside the original stream, fitting them for use as building sites. The banks of the canal were planted with shade-trees, and a road ran along either side of the canal. The width of the whole thoroughfare, which received the name of Canal street, was 100 feet. In the course of time, the canal was arched over with brick, and became a sewer.” (A History of Real Estate, page 32)
More pics of the Canal Street sewer
Steve Duncan’s Watercourses

​Tea-Water Pump & mention of lack of sewage infrastructure
“… [In 1788] The city possessed no system of sewerage, sewage being carried to the river at night in buckets by negro slaves. The city was supplied with water by public pumps. The best water came from the Tea Pump, which was fed from the Collect and stood in Chatham street, a little to the northeast of the end of Queen (Pearl) street.”
(A History of Real Estate, page 27)
Note: Item 6 on the Montresor map above lists “Fresh Water Engine from which the town is supplied.” This marks the spot of a tea-water pump.

The Commissioners Plan or the Grid Plan 1811 Library of Congress

All that was left of the Collect Pond by 1811 is the angular path of Canal Street making its way north to the Hudson River.
The Canal Street sewer dumped Manhattan’s raw sewage until 1987 when the North River sewage treatment plant was built.

Get NYC H2O's event information and news right in your inbox.